Stop imagining now, and wake up; because this is reality. Here are some frightening statistics from the CDC that will make you think we, as Americans, are living in a 3rd world country:

Yes, you read those stats right. Millions of Americans develop parasitic infections and symptoms often go unnoticed or are misdiagnosed. There are a number of ways to contract a parasite. First, parasites can enter your body through contaminated food and water. Undercooked meat or fish (sushi) is a common place for parasites to hide, as well as contaminated water from lakes, ponds, or creeks.

Parasites feed from inside your body — it’s a symbiotic relationship. They have cravings (mostly sugary foods), and you satisfy them. Antibiotics will mildly treat parasites; and because of this fact they will grow back with eggs. A Proper Protocol must be followed to rid the body of parasites.

When clients come to the spa, they report a number of issues, including constant illness, yeast infections, chronic fatigue, difficulty sleeping and waking up, worts on their hands, fungus on their feet, or bloating and gas. Many different types of bacteria and parasites can cause GI infections and diarrhea. Most are not serious and go away after a few days, but others can be quite serious.

Along with cloves, the herbs wormwood and black walnut husk are great as they will kill the parasites in general. Try taking these herbs as a tea on a daily basis as part of your parasite cleanse. You can add some honey to taste if you like. Honey is a anti-parasitic by the way, as are pumpkin and papaya seeds.

So, how do I go about detecting the presence of parasites in clients? I start with a live blood analysis, which is a diabetes prick that draws a small drop of blood. I take that blood drop, place it on a set of slides and examine it under a high-powered microscope.

I go through their blood with them, which will show parasitic activity. I will also dry the blood sample to further confirm this. Below is a photo of what parasitic activity looks like in a dried sample. Here at the Spa, I retail anti-parasitic and anti-bacterial products that will flush the body. 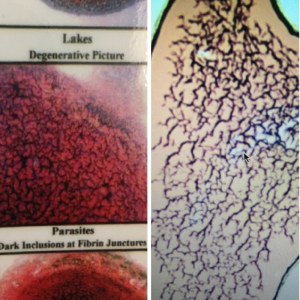